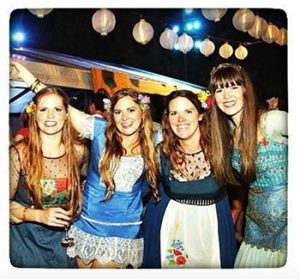 Fleur with her sisters

Fleur began her employment with the Wescorp group in 2004 as the office receptionist. After one year of full time reception and admin Fleur worked on a casual basis while completing a Bachelor of Education (ECE), and raising her three children. Responsibilities varied from relief reception, general administration, merchandising and support to the New Mountain Merchants Manager.

In 2011 Fleur took on the more permanent role of Wescorp Agarwood Assistant Manager. Assisting her Dad, Tim Coakley with the Sandalwood Seed Oil and Agarwood projects. Since 2015 Fleur has been working on Aboriginal brands Boolamarr and Ajinda with Dr Richard Walley and family. Fleur has Managed New Mountain Merchants, she is currently Sales and Marketing for the group. Since beginning this role Fleur has developed her knowledge on all Wescorp companies and history.

Fleur is the second eldest of Tim Coakley’s four daughters.