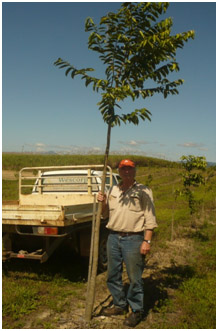 Millions of trees have been planted throughout the natural growing regions of Asia and the Assam region of India with varying success and ultimate ownership at the point of harvest.

In Assam, Ajmal Perfumes estimate there are 55 million trees planted and many of these are over 20 years old. Vietnam is thought to have planted 30,000 hectares up to 2010. Plantations are also being established in Thailand, Malaysia, Sri Lanka, Laos, Cambodia and southern China.

The question is security and ownership of these valuable trees at the time of harvest. This is where Australian agarwood plantations become very attractive along with the reputation Australian farmers have for quality, safety, and environmental respect for the future. WA intends to assist farmers and growers for the planting of 500,000 trees per annum in its licensed region.

The realisation of Far North Queensland (FNQ) becoming Australia’s major Aquilaria plantation base continues to develop. The initial 50 hectares of trial plantations scattered throughout FNQ appear to “be at home” as growth rates are comparable to those found in its native countries.

Category 5 Tropical Cyclone Yasi provided a real test for Aquilaria plantations in FNQ, one trial at Silkwood experienced up to 300 km/hr winds which resulted in a loss of only 10% of the plantation, continued strong foliage and stem growth was recorded four months after the cyclone event.

The worst hit plantation was also located in the Silkwood area, 70 % of the trees were killed through driving rain associated with extremely strong winds causing a hail damage like effect on the tree’s stems.

Other Aquilaria plantations that experienced somewhat lighter winds (up to 200 km /hr) all performed well with losses between 5 to 10% of the trees.